Winner Experience Recap: Escape with a Friend to Desert Trip 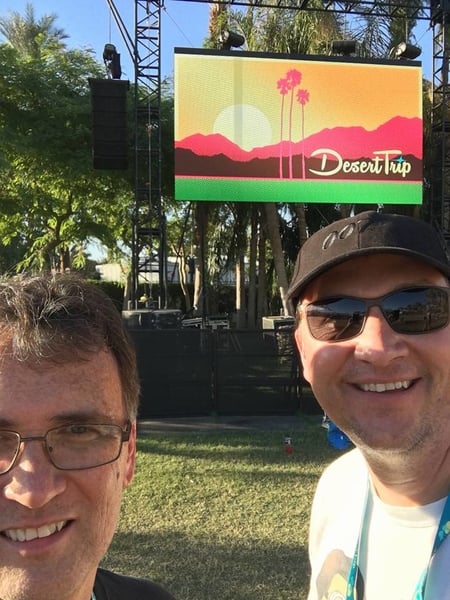 In the wake of the devastating 2016 flood that struck Louisiana, Propeller partnered with Music for Relief to create the #LouisianaStrong campaign to support the 400,000+ victims impacted by this natural disaster.

As part of the campaign, we offered an experience to Escape with a friend to Desert Trip as a thank you for contributing to the effort - the inaugural festival on the same grounds as Coachella featuring The Rolling Stones, Paul McCartney, Roger Waters, Neil Young, Bob Dylan and more.

We caught up with winner Bill Berg-Hillinger of Valencia, CA to get the inside scoop on what the experience was like. Check it out below.

First off, the people want to know - what did you do to win?

I made a donation through Propeller and then used my points to get entries to the Desert Trip promotion.

What is your most memorable moment from the festival?

Seeing so many legends in music, many of whom I had not seen previously, at one festival was an absolute blast. And the crowd was awesome. People were just so happy to be there having a great time.

Did you enjoy the performances? Tell us about them!

Very much so! All the artists played and sounded great. Each had their own setup and way of doing things, from the performances down to the visuals on the giant screens behind them. Their individual styles where clearly present and made the event much more than a performance at a festival.

Which was your favorite?

Rolling Stones by far. I had never seen them. They are such performers. They sounded great. Mick Jagger is such an entertainer.

How did Desert Trip compare to other music festivals or concerts you've been to?

This one was truly unique in it's lineup of the legends in rock. A lot of other festivals may have one or two, but this one had 6 HUGE names. Unlike Coachella, which touts a lot of names but one finds it difficult to catch even the top 5 on your list, with this festival you saw ALL them.

How does it feel knowing you might've seen one of the last shows these legends ever play?

Well I hope it's not one of the last.  I think many of these guys still have a lot more time in them!  (Mick Jagger even joked about how this was the "Catch them before they croak tour").  But I've also heard The Who saying their going to hang it up soon.  So I guess if that's how it falls, it feels AWESOME knowing I did get see them all live!

Lastly, why was it important for you to support this cause in particular?

Helping others should be important to everyone.

Learn more about Music for Relief by visiting their profile on Propeller. Thanks to everyone who participated.