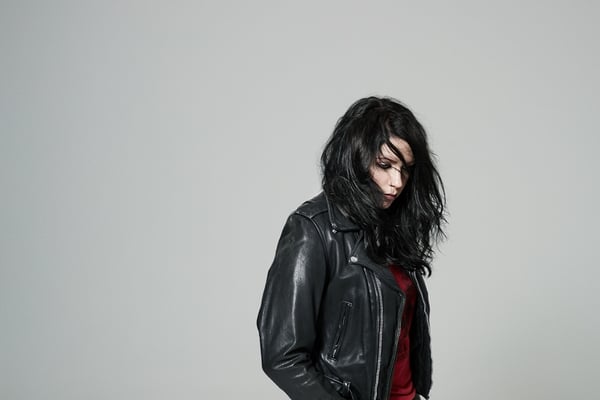 Brandon Deroche: You've been vocal about various causes, including LGBTQ rights most recently. Can you tell me a little bit about your outlook towards activism?

K.Flay: Well, I think generally speaking my outlook on activism and engagement in that world really centralizes on interacting with your own privilege. And in the cases in which you have it, using that to help shine a light on people or situations or statutes or laws that infringe upon the privilege of other people.

As a touring musician who travels around the world freely, and as an American white person, I think it struck me in a more intense way just because of the amount of traveling that I do. We are now a country that limits who can enter our nation. To me that's really upsetting, especially because I feel like everyone I know of my generation, we're all from a lot of different places. This really is to me a country of immigrants, and it's a melting pot in the truest sense. So I think when I'm starting to see this kind of xenophobia and racism, I feel an imperative to say something.

Brandon Deroche: As a musician, how do you feel if your fans were to say "shut up and entertain us"?

K.Flay: Well, Donald Trump being elected actually has helped this argument, because we elected an entertainer as president. So I think that line between people who are in the media and people who are politicians has been blurred pretty badly.

I feel like I have the grounds upon which to voice my opinions that I feel really strongly about. They're opinions that for me feel like they're well-researched, and it's not something that I'm just saying off the top of my head. This is stuff that I've really thought about for many years throughout my education and then throughout my adult life as well.

Brandon Deroche: Do you feel you have to worry about alienating your fans when you speak out on these issues or do you feel they are right there with you?

To me, it's all part of the same kind of world of being honest and being compassionate both with myself and with other people. Maybe from a songwriting perspective there's more inward focus beause I'm thinking about my own motivations and behavior and psychology ... To me, that's kind of inextricably linked to the more sort of politically charged element to what I do, which is also about being honest and engaging with feelings of injustice, and hopefully justice on the other end of it.

Brandon Deroche: After Trump recently announced the transgender military ban, you joined multiple artists in responding. Can you tell us about why this is important to you?

K.Flay: Totally. I think with the issue of Donald Trump ... I mean there's the issue, there's many issues ... But I think with the trans ban in the military you have this very direct contradiction of a previous promise.

I lived for many years in San Francisco and then in New York and then in L.A., but my formative years were in the Bay Area, which is one of the most open and tolerant and self-expressive metropolitan environments in the country. It kind of inculcated me early on with this sense that when people are given the freedom to be who they naturally are, it creates a better city, a better world, a better space for all of us.

And I just think it's kind of reprehensible to be honest with you.

Especially when it comes to people who are serving our country and sacrificing their life potentially, and devoting their careers to this. Again, I just feel like it's important to say something, to let people know. I think sometimes you think something but you don't say it publicly, and so people don't really know that you think it or that you feel it. And I think when a lot of people come together and say something meaningful, it can help people who are in a vulnerable position to feel like they can have power too. They have support.