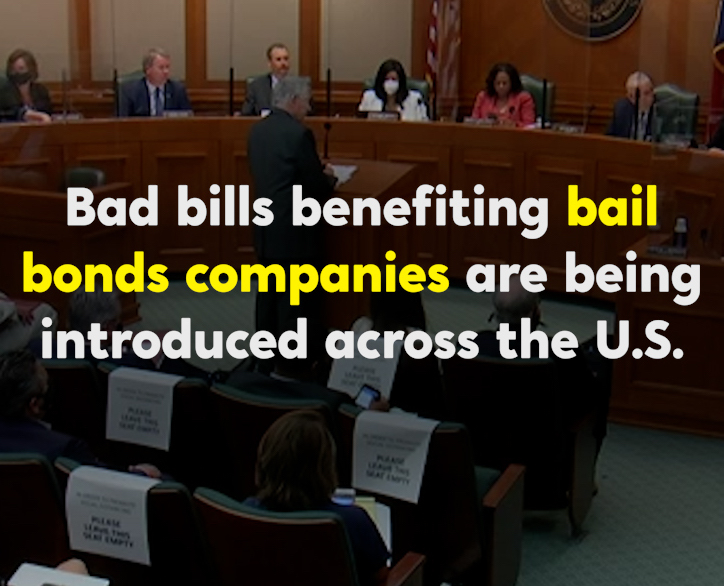 Across the country, calls to end broken cash bail systems continue to grow. As a nation, we are beginning to own up to the fact that a pretrial system that relies on cash bail is unfair because it criminalizes poverty and race. Lawmakers at every level are advancing reforms that reimagine pretrial justice – they do this by eliminating cash bail and by restoring the presumption of innocence. In recent months, federal lawmakers introduced legislation that would offer support to states that want to end their broken cash bail systems.

However, with every step forward, there are forces working to move us two steps back. In too many states, we are fending off regressive legislation that has reformers and advocates on the defense. In these jurisdictions, legislation is being introduced that prohibits the presumption of innocence and pretrial release, expands the pretrial detention net, eliminates the possibility of any bail for certain charges, imposes the use of biased risk assessment tools, and seeks to limit the reach and impact of charitable bail organizations like The Bail Project. If these bills pass, The Bail Project's reach would be limited, the use of cash bail will expand, and preventative detention will be used more frequently, disproportionately impacting people of color.

At The Bail Project, we know there is a better way. With over 23,000 bailouts nationally, we know that community support in the form of voluntary text reminders, transportation, childcare, housing, mental health treatment, and employment assistance – not money – is what is needed to ensure that someone returns to court pretrial. With our Community Release with Support model, our clients return to their court dates 90% of the time without any of their money on the line. Legislation must end cash bail and invest in community and freedom.

Please take action now and join The Bail Project to fight against the status quo pretrial policies that have fueled mass incarceration. Sign your name to stand with us to push for meaningful bail reform and write your State Senators and Representatives with the message below:

This message will be shared with senators and representatives in your area as harmful bail legislation is introduced. Currently active areas: Michigan, Ohio, Federal

I urge you to vote for meaningful bail reform and invest in local social service organizations, in order to end our reliance on wealth-based detention and allow the vast majority of people merely accused of an offense to be afforded Community Release with Support, or the equivalent of release on recognizance with access to social services that will ensure return to court. Pretrial detention must be the rare and limited exception.

Any bail reform you advance must adhere to the principle of innocent until proven guilty. It must appreciate that freedom must be free. Your constituents deserve a more fair and just pretrial system and an end to cash bail.

Thank you for your consideration.